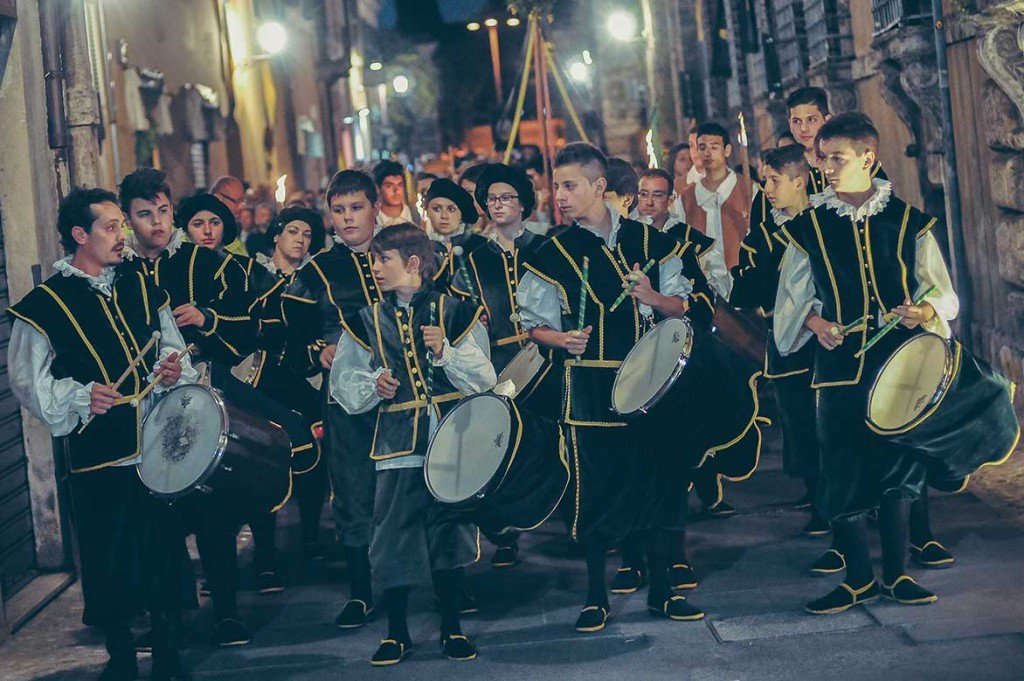 “The renaissance in Acquasparta”, or as it is in Italian “Il Rinascimento ad Acquasparta” festival started in 1999. It is rooted on the double meaning of its name, not only a Renaissance as a historical period, but also as a revival of the ancient glory of Acquasparta, and as a real re-discovery of those personal relations on which the community found it’s peacefulness and wellbeing.

For ten days Acquasparta is divided geographically into three areas, called Contrade. The Contrada del Ghetto with black and green banners, the Contrada di Porta Vecchia with yellow and blue banners and the Contrada di San Cristoforo with white and blue banners. The Contrade compete to get the towns keys after having challenged each other in four different challenges of entertainment, Gastronomy, Lince’s Palio (competitions on horseback) and Snakes and Ladders, (Not the board game as such but the same idea, played out on a playing field !!)

Each Contrada, in their own taverna, recreate typical local recipes of the 17th century which make up the gastronomy competition and a jury must judge on the flavour and presentation of the dishes from the period. Each night during the festival all three Taverne are open to the public and you can re-discover old fashioned dishes cooked and served by locals for very little money.

Each of the contrade put on an evening of amusement, that is to say, the Entertainment Competition, which is judged by a special jury. The historical plays are performed by the locals who dedicate their time to the re-creation of the 17th-century ambiance to honour the Cesi family and in particular Federico Cesi’s life, Duke of the town and founder of the Lincei’s Academy. Finally, the three contrade compete in a horse tournament, the Lince’s Palio and in a living version of the board game Snakes and Ladders. These games are held on the last day of the festival and the representatives of the three contrade will compete in ability and deftness tests, in amusing games, trying to get the highest score for their own contrada.

Thus “Il Rinascimento ad Acquasparta” is a festival of re-discovered historical, artistic and culinary traditions and also of new friendships, held in the beautiful surroundings of the medieval town with all the playfulness of a healthy competition.